Pastor Suleiman's False prophecy about the War in Cameroon 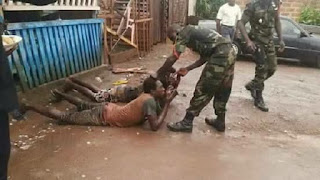 It is my opinion that this prophecy by pastor Suleiman is fake, and I will give you a few reasons. Suleiman said, “If I tell everything that I saw, they wouldn’t let me back in again, so I will filter.” Did you ever see a man of God in the Bible who was afraid to tell mere mortals what God had commissioned him to tell them?  He is afraid of man more than he is afraid of God. God gives him a message to tell the people, but he says that he will not give it to them because he does not want the authorities to pursue him.
Suleiman said, “If you love me, you allow me, filter.” I will repeat Paul’s words to him, “ If in this life only we have hope in Christ, we are of all men most miserable(I Cor 15:19)”. He persisted, "It is not anglophone /francophone. It is demonic to suck blood." No doubt there are principalities and powers, but this is typical of the early prophecies of born twice and raised from the dead where people were dying and seeing demons drinking blood. That is the imagination of the African mind due to our culture. We always believe in witches drinking and sucking blood from us. In a war, there will be blood spilled. He saw provinces.
Suleiman continues with his prophecy, and this time he uses a technique common to preachers. Cameroon is divided in provinces and not states. Does the Lord need to show anyone in a special revelation that Cameroon is divided in provinces?
Suleiman reported, “Papa God showed me ten. Is it ten?” This God has to show Suleiman ten provinces of Cameroon. Very few Cameroonians will not be able to tell you how many states are in Nigeria because we learn that in school. The same goes with Nigerians because they do the history of their neighbors. There are very few people in Cameroon who attended secondary school, talk less of high school and university who do not even know how different countries are made up of.
Suleiman must have Cameroonian friends, and those friends must have at least spoken to him about the provinces. That again shows the dubious nature of this prophecy. There are very few people in Cameroon who attended secondary school, talk less of high school and university who do not even know how different countries are made up, talk less of how many provinces are in Cameroon.
Pastor Suleiman continues, “What God showed me is ten. I saw ten. Is it ten? I saw ten.” Why would God give something this banal as a special revelation?  That is because the predators like the TV evangelists constantly employ the shotgun technique. It is a technique where the predator asks generalized set of questions with the hope that someone will feel touched just as bullets from a shotgun into a pack of monkeys will catch one. “Is it ten? I saw ten. Is it ten?” The people start to jump up that God has showed the man of God that Cameroon has ten provinces.
In a current dispensation where many suffer from the Itchy Ear Syndrome, it is normal to see false and fake ministers employ this technique with greater success. Suleiman pretends as if it is a revelation to solicit the participation of the sheeple. Lo and behold, they are so carried that they start to jump up and down for the great revelation that the Lord has given. That is false prophecy.
He says that God told him that the church in the ten provinces, sorry regions should pray consecutively for 21 days. He said that they should pray for the strong man and not for peace for war to end. Wars and rumors of wars are a sign that Jesus is coming soon. It is not a secret that there will be wars.
He says that in this war, some people are making money. Look, it is common sense that in every war, there are people who are making money. That is why those who sell arms and render other types of services make money, and they are always the instigators of war who do not even want it to end.
To show you how fake Sulieman is, he said that the people should not pray for peace, yet at the end of his sermon in his prayer, he was praying for peace. I feel bad for this people. You see, when a people have suffered for too long, they will drink fairytales on fairylands with insatiable gullibility.

Until then, this prophecy is fake and should not be respected.

“Bonyfish beware because the same net that caught the jawless fish, caught the cartilaginous fish” (Hamilton Ayuk). Beware earthly paradise seekers because there is a serpent in every paradise"(Hamilton Ayuk). "If in this life only we have hope in Christ, we are of all men most miserable." (I Cor 15:19). "It is not how well you know a person; it is how well you treat them that they will live longer and happier with you." Hamilton Ayuk. Idle people write, idler people read, and idlest people read and whine that idle people are taking their time (Hamilton Ayuk).
at April 01, 2018

Did you ask questions to understand well what you heard?

A friend cracked a joke to me this morning that he will shoot down the doors of our conference, if he comes to enter and it is still l...