"What Is The difference Between A Vision And A Dream?"

A. Visions
Definition:
The Greek word /horama/ means to supernaturally gaze at an object externally or have an inspired appearance internally. Each vision usually has its own purpose, but one general purpose is that it inspires the beholder.
Peter starts by reminding the people of the prophecy of Prophet Joel (2:28) that their sons and daughters will prophesy, their old men shall dream dreams, and their young men shall see visions when the Holy Spirit came on them. The old men will dream dreams because they have experienced many things. They are now old and do no more have the strength to do new things. The young men will see visions because they have the strength, but they have not experienced new things. They have the ambition. Considering that the society did not have a place for the woman, they did not expect them to have any ambition other than how to have children for the man and take care of the household duties, in addition to the general functions of prophecy (foretell and forthtell) which were also given to men. There were at least three visions in Acts of Apostles.

A) The vision of Peter about Cornelius (Acts 10:11).
We learn a lesson here that God will always appear to those who seek him. This vision removes the greatest conflict of the era: Jews versus Gentiles. It showed that they are one, and God was ready to save all of them, in so far as they believed. It is the archetype of unity amongst brethren. Today it will be a unity between whites and blacks in America or have white South Africans collaborate with black south Africans in and out of the church.

B) The Vision of Paul at Traos (Acts 16:9).
The Lord in giving this vision showed that He guides the steps of the righteous person because in this vision, God sends him definitely to the place where he supposed to go. This vision shows us that the will of God is for His children, and He will always send them where He wants them to go, in so far as they want to do His will. When Paul obeyed and went to Philippi, it ended up being one of the best churches he will ever start.  If you obey and do as the Lord wills, you will never fail!

C) The Vision of Paul in Justus’ house at Corinth (18:9).
In this vision, God wanted to encourage Paul to make him know that He was with him, no matter the attacks from the people. God wanted Paul to keep preaching and not be afraid. My friends, God is with those whose hearts are towards him so that he can help them. His eyes actually run to and fro, seeking for them. You show yourself to God by believing in his Son and constantly being in prayers. Now, I want us to look at dreams.


B. Dreams
Dreams are living mental images, occurring during sleep. Functions of dreams vary per individuals and purpose. Job chapter 33:14- summarizes the purpose for which God may give anyone a dream. Dreams are for (a). didactic or instructional purposes (V 14-16; Mt 1:20), (b).Warning; to preserve man from danger (V. 17-18; Gen 20:3), (c). Revelations-to reveal the future Gen 37:5-10  and (d). Encouragement- to encourage for the present life: Judges 7: 14-15. Dreams have various sources. If you walk with God, you should take dreams seriously!
Dreams come from God (Gen 20:3; Gen 28:10-12; Gen 31: 11, 24; Judges 7:13-14; I Kings 3:5; Job 7:5). If you have a little fear of God, then he will speak to you in a dream or some other means like He did to the wife of Pilate (Mt 27:13-19). If there is a child of God who does not dream, or God does not speak to him or her in a dream at times, then that person is not walking with God (I Sam 28:6,15). God will never do anything without revealing it to his prophets (Amos 3:7-9; Joel 2:1-3). God has shown me several dreams that gave me information before others knew about  them.
Dreams come from a man’s heart; when you think too much about something (Ecl 5:3; IS 29:7-8). If you keep lusting after a girl, you might end up dreaming that you were married to her. If you like money too much, you may dream that you have become a millionaire. If all dreams came true, there would have been many millionaires (perhaps even with you) on this earth.
Dreams come from the Devil, like nightmares. That is because God does not bring to us the spirit of fear (2 Tim 1:7), and nightmares come just to frighten us (Dan 2:1-13) and lead us astray from God (Jer 23:27, 32). Nevertheless, there are big differences between visions and dreams.

i. Differences in the types of dreams.
The difference between God’s dream and nightmare or Man’s dream is that; in the dream from God, the elements of literature: plot, setting, characters, themes and style are very clear to produce a totality of effect, unlike the dream from man that is disjointed and ends up with you not knowing what you dreamt or what you are doing. The dream from man is very confusing. You dream how you are rich, and the money is under your pillow. You get up from sleep and quickly look under the pillow, but it is empty bed. The dream from the devil brings fear; paralyzes you to be hopeless and faithless, so you get up, losing your faith in God or losing your self-confidence, unlike that of God which though may harbor fright, it does not paralyze your reaction.
In Africa, some people get up from nightmares and run straight to the witch-doctor, while their western counterparts run to the psychic. The devil has just helped them because he wanted to draw them away from God. That is why he brought the nightmare in the first place. However, if you run to God, you end up being saved or being victorious because it motivates you to preempt and be proactive. Sometimes, you dream about people trying to eat you up. You wake up, but you totally forget what the dream was all about. Other times, you dream about having sex with a woman you do not even know. At times they paralyze you in your dream, and you start to tremble. Other times, you have sex and even ejaculate with a certain old woman. That is a nightmare, and it is an attack from evildoers to take away your luck. That is from the devil, but you should know that, "no weapon fashioned against you shall prosper!"

ii. Differences between visions and dreams.
Therefore, the difference between a vision and a dream is that a dream happens while you are asleep; whereas, a vision happens while you are awake.  You see a dream when unconscious while you see a vision when you are conscious. We could say that you see a vision while semi-unconscious in the sense that you are not in your natural self. You have to enter into some form of trance (Num 24:4, 16). It is usually very brief. In the Bible and even nowadays, mostly young people have seen visions. It was and it is rare for old people to see visions. They saw dreams. The old people have no more strength to do anything, so they see dreams. They dream of what is to be and what it was.  Look, go to the nursing home and you will hear the old men whose thing cannot be resurrected, even by a bucket of Viagra, talk about women. They dream and dream for that has become their potion-dream. Meanwhile, the young people have the strength to soar like eagles and to achieve their goals, whether in the sky or in space. They see the visions!
There is a reason why Joel saw that the old men will dream dreams and the young people will see visions. The inability of Africans to make this dichotomy has deprived their young ones from being included into leadership. I do understand that Africa is an octogenarian society, but the elders sat behind as advisers or sages. These old people should sit and advise these grand-kids, rather than mess up the continent. No wonder the continent is going no where because without a vision, the people perish. You will realize that African countries with younger presidents are seeing greater visions and taking the continent to higher leaps and bounds.

Until then, know that God speaks through dreams and visions.


Please make a donation on my paypal to further the work, and you could invite the author to present this teaching. 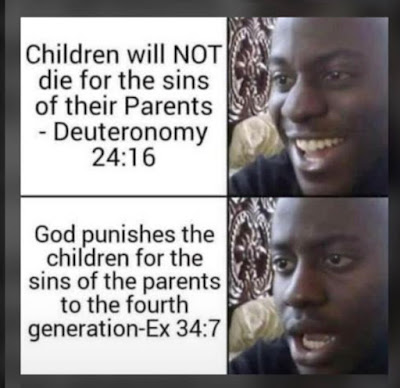